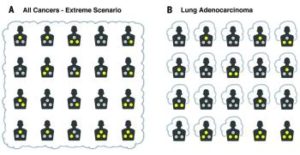 The genetic mutations driving the apparition of tumors are commonly linked to environmental and intrinsic factors. The part of environmental risk versus mistakes in DNA replication have been heavily discuted through the year. In 2015, a publication by Vogelstein and Thomasetti bring a new theory explaining why some cancers occur more than others (Tomasetti and Vogelstein, 2015). Using statistical analysis of cancer cases in the U.S., they concluded that differences in the number of stem cell divisions in an organ are strongly correlated (0.81) with the total number of divisions of stem cells maintaining that tissue’s homeostasis with the frequency of cancers in that area. There aren’t as many stem cells in the brain, where few cancers occurred, than in the colon and intestine where occurred a lot of colorectal cancer. As this study is very controversial, hundred of studies have been written in response, bringing this topic update. Last paper of Vogelstein and Thomasetti conclude that the role of DNA typos is organ related, and indicated that about 66% of cancer-driving mutations are due to random DNA replication errors, with only 29% due to environmental factors and 5% to inherited mutations (Tomasetti et al., 2017).