In the most common primary brain tumors, malignant glioma cells invade the extracellular matrix (ECM) and proliferate rapidly in the cerebral tissue, which is mainly composed of hyaluronan (HA) along with the elastin present in the basement membrane of blood vessels. To determine the role of ECM components in the invasive capacity of glioma cell lines, we developed a 3‐D cell‐culture system, based on a hydrogel in which HA can be coreticulated with kappa‐elastin (HA‐κE). Using this system, the invasiveness of cells from four glioma cell lines was dramatically increased by the presence of κE and a related, specific peptide (VGVAPG)3. In addition, MMP‐2 secretion increased and MMP‐12 synthesis occurred. Extracellular injections of κE or (VGVAPG)3 provoked a pronounced and dose‐dependent increase in [Ca2+]i. κE significantly enhanced the expression of the genes encoding elastin‐receptor and tropoelastin. We propose the existence of a positive feedback loop in which degradation of elastin generates fragments that stimulate synthesis of tropoelastin followed by further degradation as well as migration and proliferation of the very cells responsible for degradation. All steps in this ECM‐based loop could be blocked by the addition of either of the EBP antagonists, lactose, and V‐14 peptide, suggesting that the loop itself should be considered as a new therapeutic target. 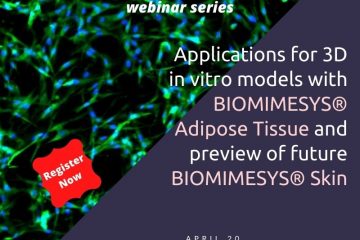 Our next webinar with Molecular Devices : A physiologically-relevant 3D ECM for in vitro oncology research and intelligent high-content imaging of 3D models

We are very happy to invite you to our next webinar about 3D cellular cancer models and our BIOMIMESYS® Oncology matrix which allows cancer cells to be cultured in a tumor-like environment, with the possibility Read more…